The Search for a Pacific beach La Mariposa Hotel

* This is a digitized version of an article from The Times’s print archive, before the start of online publication in 1996. To preserve these articles as they originally appeared, The Times does not alter, edit or update them.

Under Some Coconut Palms near the entrance to Manuel Antonio Park, a woman sells juice. Little capital investment has gone into this business: a booth, a glass juice squeezer for oranges, a machete to cut coconuts constitute the operation. The woman twists and presses the oranges for me with wholehearted vigor. I hope her hands are clean, because I really want this juice.

It’s hot, and I have to cross some open beach and wade a stream to reach the entrance to the park, where rocks and trees will give shade.

American tourists who make their way to Manuel Antonio Park, on the Pacific coast of Costa Rica, tend to carry binoculars and serious cameras along with their sunscreen. This is a naturalist’s paradise, 1,707 acres of jungle coming right to the high-tide mark on some of the most beautiful beaches in the world. The park protects 109 species of mammals, including white-faced and howler monkeys, sloths, coati-mundis, raccoons, iguanas and squirrel monkeys, for which this is one of the last remaining habitats.

There are also 78 species of fish and 184 species of birds. One devout American bird watcher, who hiked to a remote part of the park with a guide and sat in the same spot from sunup to sundown, said that he had seen more kinds of birds in that single day than he had seen in all the rest of his bird-watching life.

I arrived in Costa Rica exhausted. Because of flight delays and postponements, it had taken us about a day to get from New York to Quepos, the town nearest the park, by way of San Jose, the country’s capital. I wasn’t eager for ambitious trips to see the wildlife. Fortunately, in this area, the wildlife often comes to you. At the hotels, iguanas stretch and pose in the sun as you eat lunch. At the beach, white-faced monkeys dance nervously up and down the trees, descending toward an offered banana, retreating, returning, snatching the banana and heading to the leaves to eat in peace.

At midday, my friends and I sometimes looked up into the leafy canopy over the path and saw the monkeys sleeping, tummy-down on the branches, with arms and legs hanging like socks on a clothesline. (I preferred them asleep. Awake, their solemn human faces promised a wisdom they could not deliver. Instead of revealing the meaning of life, there was this undignified grabbing for bananas.) Manuel Antonio Park, four miles south of the town of Quepos, was founded in 1972 largely to protect the beaches and adjacent forest from real estate development such as has encased so much of Mexico’s coastline in condominiums and hotels.

A national park system occupying nearly 10 percent of Costa Rica’s landmass, it is a far-sighted government’s hedge against destruction of this country’s glory, its virgin forests, by developers, loggers and slash-and-burn farmers. (By many estimates, whatever forest is not preserved by law in this country the size of West Virginia will have disappeared within 10 years.) There are four accessible beaches at Manuel Antonio: Espadilla, Espadilla Sur, Manuel Antonio and Puerto Escondido. Most people, however, simply call the nearer beaches by the numbers One, Two and Three. I chose to concentrate on Beaches Two (Espadilla Sur) and Three (Manuel Antonio).

Beach One (Espadilla) is not technically within the park, and though it is spectacularly beautiful to walk on, it is extremely dangerous for swimming. Riptides, which can overcome even experienced swimmers if they panic, are frequent on Beach One; in our first week at Quepos, five people drowned, all at Beach One, all Costa Rican tourists. (Puerto Escondido, the fourth of the beaches, is accessible only at low tide. It is an hour’s hike from the park entrance along an overgrown path; to get there, you must sign in in a ranger’s book and be warned about poisonous snakes. Personally, I didn’t think it was worth it.)

Beach Two, on the north side of the high, forested bluff called Cathedral Point, which divides the farther beaches, offers a long stretch of pure white sand, with offshore rocks and awesome views across the bay and into the mountains. Beach Three, on the south side of the point, is totally protected, with no surf whatsoever. Both provide perfect swimming -soft sand, no pebbles or shells to hurt the feet as you enter the water, warm water (83 to 85 degrees on the average) with occasional cold spots for refreshment, gentle waves or none. The snorkeling on the north side of Cathedral Point is very good, although you have to remember to put heavy sunscreen everywhere.

The Costa Rican sun is equatorial, brutal. (Go due west, and if you missed the Philippines, you’d hit Vietnam.) It is impossible to sit in this sun for long, no matter how much you love sunbathing. Fortunately, the beach is edged in first- and second-growth trees, towering natural umbrellas. Many Costa Ricans bring hammocks and hang them from branches.

On Beach Three, there are picnic tables under the trees. Each beach also has toilet facilities and showers, set back unobtrusively in the forest.

The most common tree on the shore is the manzanillo, whose shimmering foliage seems particularly attractive to sit under. But a sign at the entrance to the park warns (in Spanish) that the manzanillo’s fruit, bark, twigs and leaves contain a highly toxic sap – if any drips on your skin or towel, it can cause a nasty burn. We played it safe and made camp beneath a banyan tree whose fruit attracted iridescent hummingbirds and tanagers. Another day we tried lying under a coconut palm. Beach life here is made of such decisions; which tree to lie under, which beach to swim at.

F OR HOURS, I LAY ON the beach in the shade and watched the ocean and the offshore rocks, which, as the light played over their monumental forms, seemed like natural, primeval, Pacific versions of Monet’s haystacks. I was aware of the jungle at my back. I heard the birds and smelled, sometimes, the sausage tree, whose long, potato-like fruits, when they fall and smash, smell like the essence of everything rotten.

One day when we felt unusually energetic, we walked the nature trail around Cathedral Point, which takes about 45 minutes. Roots on the path and slippery leaves give a taste of the difficulties of jungle hiking. The path climbs steeply through the cooling trees to a hot, exposed point surprisingly high over the rocks below, reminding me – not for the first time -of Capri, and particularly of the spot from which Tiberius pushed his no-longer-favorite favorites to their deaths.

My friends and I were staying at the Mariposa Hotel, a 10-suite hotel high on a mountaintop overlooking the Manuel Antonio beaches, Cathedral Point, the offshore rocks and islands and the vast Pacific. None of the good hotels in this area are directly on the beach, and getting to and from the beach becomes something of a project. One can walk from the Mariposa down a broad path through the forest to the northernmost end of Beach One in 15 minutes (coming back up the steep path takes at least 25), to the park entrance in another 15 minutes and to Beach Three in another 10.

One can take a Quepos city bus, which passes in front of the hotel, find a cab or hitch an occasional ride with the hotel van to the oasis of juice vendors near the park entrance. If figuring out how to get to and from the beach every day is a problem – and the heat makes even little problems seem big – still, it’s about the only problem one has.

Eventually, we did the really lazy thing and rented a car. We parked in the shade of the coconut palms near the juice vendors, behind the $15-a-night cabins on the beach. (We met a 26-year-old Californian who was staying there with her husband and described the cabins as ”pretty basic.”) A boy of 11 asked us if we wanted him to watch the car. ”Watch it?” said my friend Wendy, who speaks Spanish. ”What could happen to it?” He smiled happily and pointed up at the coconuts. ”Very dangerous,” he said. 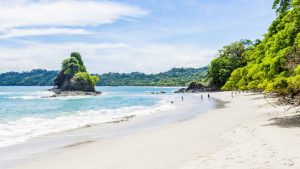 We invite you to travel to a paradise in Costa Rica on the Pacific coast. This is a national park named Manuel Antonio. Here you 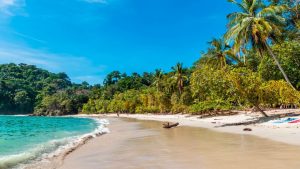 Places to Visit in Manuel Antonio

Manuel Antonio in Costa Rica is a dream destination where a unique kind of vacation awaits you. Its paradise-like beaches, picture-postcard landscapes, and rainforests of 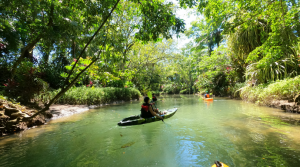 We introduce to you a new tourist tour in Manuel Antonio, which you can book at La Mariposa Hotel, an adventure and wildlife activity. Nacarcosta 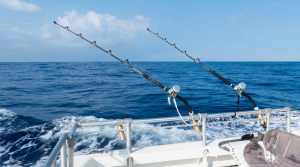 Costa Rica is one of the most visited countries for the practice of sport fishing, due to the presence in our seas of three of